Next week on PBS: Compañeras 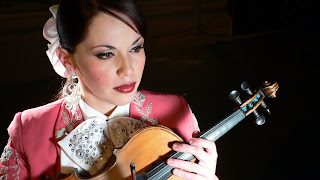 If you regularly read this blog, you've heard me talk about a Mariachi book that I've been working on. (If this doesn't sound familiar, check out the sneak peek that was part of the Chica Lit Valentine's Day Tour.)

I just about fell out of my chair when I heard about Compañeras, the upcoming PBS series Independent Lens documentary about Mariachi Reyna de Los Angeles, America's first all-female mariachi, founded in 1994. Hosted by Terrence Howard, the show will air at 10 p.m. on April 1, 2008.

The most prominent of Mexican mariachi - Mariachi del Sol and Mariachi Vargas de Tecalitan - are presently and historically all male. Female mariachi are still frowned upon or considered a joke in Mexico. When I wrote The Ballad of Aracely Calderon, my challenge was to help the readers understand what an uproar it would be if a woman - in Aracely's case, an American-born daughter of a family of mariachi - took the lead of such a prestigious mariachi group ... even in 2008. But when I saw Linda Ronstadt ride a train on-stage during her performance in Canciones de Mi Padre, she was like a queen and I kept that image in my head as I wrote Aracely. To me, female mariachi are regal. The fact that they persist in spite of the misogynist attitude of their male counterparts makes them heroes in my eyes.

As for my book, The Ballad of Aracely Calderon, I've decided to dress up like a mariachi for my new author photo!
Posted by Unknown at 1:49 PM

i can hardly wait for your new book, mary!! it sounds wonderful!

Wow, I can't wait for that photo! What a good idea; I love your sense of fun. And agree, these women are heroes.

That sounds like a fun photo session! I'm going to see if I can Tivo that. Sounds fascinating!

Hello. This post is likeable, and your blog is very interesting, congratulations :-). I will add in my blogroll =). If possible gives a last there on my blog, it is about the Aluguel de Computadores, I hope you enjoy. The address is http://aluguel-de-computadores.blogspot.com. A hug.

There was just an all woman mariachi band, Mariachi Rosas Divina, that played here in Houston for the Sor Juana Festival. I was so sorry I missed them!

I think your photo will be awesome!