Mom won a free catered lunch for her office and a total dumb ass had the balls to come up to her and ask, "So what are they giving us?"

Dumb Ass: Did you ask what kind?

Dumb Ass: What if they give us shit?

Mom: Then you can eat it.

I'm so proud that I could cry. But don't you wish you could come up with zingers like that on the fly? I always think of good stuff to say days later.
Posted by Unknown at 10:52 AM 1 comment:

I admit that I had no plans to attend RWA National this year. But Dana talked me into it and now having returned, I'm so glad that she did.

It has been two years since I last attended the national conference and somewhere in that time I forgot the affect it has on me. Yes, I did some great networking and (ahem) drinking with the girls, but from the very first day it made me believe again.

While having lunch at the Hotel Lawrence Wednesday afternoon, I noticed a woman walk in with a pink, "First Sale" ribbon on her conference badge. After we paid the bill, I walked over to her table and congratulated her, hoping she wouldn't think I was a weirdo. She didn't, but she shared that it took her 24 years before she sold her first book to Berkeley. (And psst! it's coming out next year so keep your eyes peeled for Nancy Haddock!) If that doesn't make you believe in the power of persistence, than I don't know what could!

Later that night, I signed alot of copies of Names I Call My Sister at the Readers for Life event. Some times I wonder if my books are out there in stores, sitting all alone on their shelves. But then one woman walked up with her copy of Friday Night Chicas and told me how she'd been wanting me to sign it for a long time. That one person made me believe that people other than my friends and my mother actually read my books!

On the last day, my two roomates and I attended a workshop by Linda Howard, Linda Winstead Jones and Beverly Barton. Immediately, we saw ourselves in twenty years: still best friends, still laughing at each other and still lookin' pretty damn fabulous. Observing those three successful women share their experience in collaborating on the Raintree mini-series made me believe that authors win when they are generous and inclusive.

And finally, after sitting next to one of my idols on the bus to the Avon Family dinner and then attending her workshop the following morning, I believe that it is possible to be incredibily successful and still be a cool person. Not all famous authors I've met are cool much less polite. Susan Elizabeth Phillips is graciousness personified and really funny so with that said, I want to be her when I grow up!

Chicas In The House 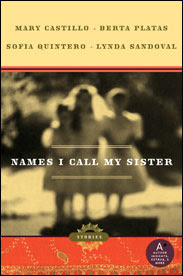 Every year more and more Latinas are being published in romance and we'd like to get the word out to our Dallas fans!
If you're planning to attend RWA National in Dallas, or you happen to work in downtown Dallas and want to hang after hours, Lynda Sandoval and I will be signing Names I Call My Sister at the Reader's For Life event on Wednesday, July 11 from 5:30 to 7:30 p.m.

Caridad Ferrer will also sign copies of her young adult novel, Adios to My Old Life and Caridad Piniero will be signing Secret Agent Reunion and Sex and the South Beach Chicas. This massive booksigning event is free and open to the public and all the proceeds from booksales go to literacy causes.

Next week, I'm headed to Dallas, TX for the Romance Writers of America National Conference. I've skipped the last two because in 2005 I was this close to giving birth to the Little Dude. (He arrived three weeks later.) In 2006, we went on our first family road trip to the haunted cottage in Carmel.
Anyway when I attended my first RWA conference in New York, I was a lost little lamb with a book that no one seemed to want. (Click here for how I almost didn't sell my first book.) So I created a soundtrack with stuff like Hand In My Pocket by Alanis Morrisette ("I'm young and I'm underpaid; I'm tired but I'm working, yeah!") and Celebrity Skin by Hole ("I'm not selling cheap, no I'm not selling cheap"). As you can see, I needed a little attitude to my then, flagging spirits.
My second conference was ironically Dallas, when I was technically a published author but my book wasn't coming for another six months. My soundtrack was much more subdued than the previous with songs like Everyday Is A Winding Road by Sheryl Crow ("Everyday is a winding road, I get a little bit closer ... Everyday is a fated sign").
If you haven't been to a national writer's conference, the atmosphere is electric. You can smell the hope and the expectations and unfortunately, the crushing disappointment when the story a writer has put her heart and soul into doesn't fly. No matter what happened to me at my past conferences, I always came back with renewed energy to write my buns off.
So while I'm supposed to be polishing chapters 26 thru 29 this morning, I thought I'd share the soundtrack that I'll take with me to Dallas that has a little edge, a little sweetness and a lot of fun.
Posted by Unknown at 9:57 AM 6 comments:

An extended excerpt of Switchcraft is now up and so is your last chance to win a signed ARC of this eagerly awaited book (yes, the one with all that damn cussin'!).

Sorry, that was catty of me. But wait till you read the love scene in chapter 24!

Besitos,
Mary
Posted by Unknown at 10:33 AM No comments: