Other than the Little Dude and I are recovering from colds. But I finished revising Act II of my Mariachi story and I'm now deep into Act III.

If you haven't entered my latest contest, hurry on over before Thursday. I'm giving away signed coverflats and will select ten names to be entered into the grand prize drawing: a signed ARC of Switchcraft that the lucky winner will receive a month before the official release!

What else? Oh yeah, if you're down in San Diego and have nothing to do Friday night, come on down to Bay Books in Coronado where I'll be reading from and signing copies of Names I Call My Sister. All the details are here.

Signing out till next time ...

Mary
Posted by Unknown at 9:37 AM No comments: 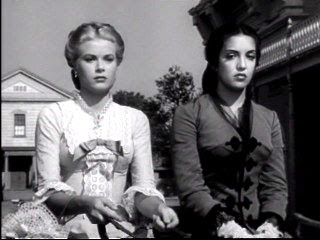 Last night I was going through my DVD collection (ahem when I probably should have been writing). Anyway, I came across High Noon, one of my all-time favorite movies. I remember the first time I watched it in one of Professor Drew Casper's cinema class. The storytelling style is spare and elegant. You know so much about every character without any prologue or voice-over. It is one of those films that says so much with so few words.
High Noon is about Will Kane (Cary Grant) who has married Amy, a beautiful Quaker woman (Grace Kelly) and is retiring his post as town sheriff. But as soon as they say their vows, he finds out that a ruthless criminal he put in prison is on the next train to even the score. Amy wants him to leave immediately; she does not condone violence of any form. The townspeople refuse to stand up to the bad guy, leaving Will to face his enemy alone.
But for me the highlight of the movie was Katy Jurado. As Helen Ramirez, she is Gary Cooper's ex-lover. While polite society has rejected her - she's Mexican, lives in gaudy splendor above the town saloon and takes young lovers she can manipulate - Helen happens to be the wealthiest person in the town. Not the wealthiest woman, the wealthiest person who has invested in almost all of the town's businesses.
Unfortunately for her, she is also the ex-lover of the ruthless bad guy. Will tells her to leave town and begins cashing out her businesses, determined to get on the next train out.
One of the best scenes in the movie - other than the infamous crane shot of Gary Cooper as he walks down the abandoned main street - is the confrontation scene between Amy and Helen. This is from their exchange (courtesy of IMDB):
Helen: I don't understand you. No matter what you say. If Kane was my man, I'd never leave him like this. I'd get a gun. I'd fight.
Amy: Why don't you?
Helen: He is not my man. He's yours.
Even though Amy is technically the heroine of the movie, Helen is one of those characters whom you want to know more about. She's a survivor, she's self sufficient and yet, there is a tragic tenderness inside of her. She has been abused and thrown away by so many men that she will never allow herself to be ruled by another one. But if Will hadn't married Amy, if he'd married Helen instead, she would've given her life for him.
Too often, us romance and women's fiction writers fool ourselves into thinking we have to create perfect, virtuous heroines. Or, we're told by certain agents and editors that the heroine is too bitchy or too experienced. The heroine's flaws are usually based on her insecurities or a wrong done to her that she carries from the past, while the men get to be rakes, men of the world or even man ho's. And do you ever notice that in most romances, the men are almost always wealthy?
That's a whole topic in of itself.
As I become a little more courageous in my own writing, I've noticed that my heroines are becoming more dimensional. They're not so nice and they don't always do the smart thing. But like Helen Ramirez, deep inside the hard shell, there is a tenderness and need to trust.
Who are the awesome fictional heroines that inspire you?
Posted by Unknown at 8:47 AM 2 comments:

Mary and her boobs present...

I finally caught my segment on SiTv and dude! My boobs upstaged me!

I had a great weekend. I'd venture to say it was a perfect weekend. Friday night was girls' night and I caught up with good friends I hadn't seen in a long time. We capped it off with milkshakes and fries from In-n-Out. Saturday, Latitude 33 Book shop in Laguna Beach hosted a booksigning with me in conjunction with SCIBA's "I Feel the Need to Read" bus tour. The crowd was wonderfully supportive and friendly (they even laughed at my jokes and met the Little Dude!). I then had lunch at the Sundried Tomato Cafe, one of my favorites spots.

Sunday was laid back. I planted my vegetable garden, hung out with my husband and the Little Dude and then started Knight in Shining Armor by Jude Deveraux. I haven't read a book that kept me up almost all night in a really long time.

So today I'm getting back into the revisions of my mariachi book and teaching my online class with OCC RWA.

FYI if you'd like a signed copy of Names I Call My Sister and can't make it to one of my booksignings (it's cool, I understand), contact Latitude 33, Under the Bridge Books, Bay Books or New & Recycled Romances to order one!

There are some new updates with the release of Names I Call My Sister.

Check out the pearls and my nifty 'do on SiTv's On the Up segments.

Bestest friend and writer extraordinare, Jen Mahal shares a little about our friendship at One Page at a Time. (Love you, man!)

Crafty Chica and good friend, Kathy Cano Murrillo interviewed me on her blog.

I guest blogged at A Slice of Orange today. 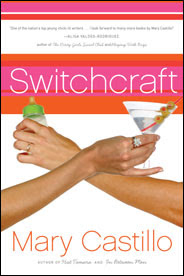 There's a sneak peek of Switchcraft posted on my website!

Is this a bitchin' cover or what?

By this time tomorrow...

I'll have a fourth book on the shelves. How crazy is that?

In all honesty, I can't quite wrap my mind around it. Maybe I'm hormonal today, but I still feel like a newbie writer checking and then rechecking her lottery ticket to make sure the numbers are right. The stories never get easier, nor do my characters become more cooperative. Also, the thrill of reading an email from a reader never lessens.

In short, this whole author thing is much cooler than a day job. And man, am I grateful to be where I am today.

But wait! My SíTv segment will air tomorrow through the 10th and then again on the 12th and 13th. On The Up isn't scheduled at a regular time; it just pops up between shows and commercial breaks. But I'll have a copy to post online soon.

Posted by Unknown at 1:52 PM No comments:

Tonight, some time between 5 and 10 p.m. the Little Dude and I are going to our local Baskin-Robbins to support 31 Cent Scoop Night and National Fallen Firefighters Foundation (NFFF), an organization that honors America's fallen fire heroes and their families.

My dad has been a firefighter with the San Diego Fire Department for 27 years. I remember one morning in particular when Dad came home with scorched turn-outs. He said he didn't even know he was on fire until his partner threw him on the ground. Dad, like most firefighters, treated this sort of thing like it was a big joke. (They're tough guys, you see.) But around that time, Dad started saying, "I love you" everytime we ended a phone call or went to bed.

Baskin-Robbins will donate $100,000 to NFFF that has developed, "Everyone Goes Home," a program that helps to prevent fire fighting line-of-duty deaths and injuries.
Posted by Unknown at 11:59 AM 2 comments: