When No Means No But It Should Mean Yes

I got an email today from an aspiring writer who happened upon In Between Men and loved it.

She asked if I ever got used to the rejections - apparently she read my story about how I almost didn't become an author. She wanted to know because her fear of "no" kept her from sitting down to write.

Unfortunately, yes, I have gotten used to people saying no. In fact, I'm slightly surprised when I get a yes!

It all began when I was in the School for Creative and Performing Arts at Chula Vista High School. We had to audition for every play and I sucked so bad that I always ended up as walking and talking scenery. But it never stopped me from trying for the roles with lines.

I finally got it but I only had one line and the nerves before each performance nearly killed me.

When I took my first screenwriting class, we had to pitch three ideas to the group and they decided which one you would write. I had do it again because the first three - none of which, thankfully, I can remember - wouldn't fly with the class.

It's not so much that I have this tough-as-rawhide skin. My writing teacher, Ben Masselink once told me, "The writer's skin has to be thick enough to withstand criticism but thin enough to take in the world around him."

Rather, I've learned not to take it personally and if a "no" stings, then there's a lesson in it somewhere. Either my idea doesn't have legs or it needs time to develop a pair; or its a matter of wrong person, wrong project, wrong time. When its the later, saying no to me is like waving a red flag in front of a bull. I'll take the hits but somehow, some way, I'll find the person who will say yes.

Have you had to keep going in spite of getting a no? Did you ever have to give up and change direction?

A True Love of Mine

I'm guest blogging today at A Slice of Orange! Check it out.

Not much else to tell you. I made it over the wall and so far, so good. The one thing that's been on my mind lately, is that many of my nearest and dearest have been touched by good fortune. I was at my local book store a few weekends ago and someone mentioned a fellow Avon author's book. When I told them how great she was, three different people each took one copy home. How cool is that?!?

And lately, friends have fallen in love, gotten pregnant, started new ventures or received new jobs. I'm just tickled that they're happy and excited. It's cheesey, I know, but what the hell, I have my moments of cheesiness.

Cheers,
Mary
Posted by Unknown at 8:00 AM No comments:

Yesterday I hit a wall with the mariachi story I'm currently writing. Basically, my heroine decided to do something that I never imagined she'd do. I jumped out of my chair when I realized where we were going and paced my office and then finally turned off the computer thinking, there's no way I'm gonna go there.

But then Ryan and I were watching Inside the Actor's Studio with Clint Eastwood. James Lipton asked Eastwood about his character, Harry Calahan from the Dirty Harry series, specifically about how he would do his own stunts. When Lipton asked if he was afraid, Eastwood replied, "No. When you're really in the character, you can do anything."

I almost jumped off the couch but I was also in the middle of eating a chocolate croissant.

Anyway, I realized that writing is like acting except we play all the roles of our characters. But are you ever writing a scene and then suddenly you realize that you're stomach is tingling with fear just like the character, or that for a moment, you could actually see the room in which your character was in. And just like actors when they spontaneously discover a new bit of dialogue or action, the writer has to go bravely forward in the character's skin.

But it's scary as hell sometimes. But necessary.

So with that brave comrades, I head off to my favorite coffee shop and jump off the bridge with my character.

Valentine's Day Doesn't Have To Suck

Thank you everyone for sharing your kind comments on the tasty tidbit of Switchcraft! If you haven't already, check out the sneak peek of my May release, Names I Call My Sister featuring stories by moi, Berta Platas, Sofia Quintero and Lynda Sandoval.

There will be more Sisters sneaks as well as a Switchcraft Sneak Peek posted on my website in the near future, so don't be a stranger!

I'm posting an extra special Valentine for all of you tomorrow. But it will be up for tomorrow only so make sure that you stop by! 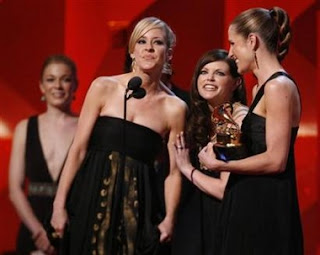 To steal a line from my book, Switchcraft, I'm so proud that I could fart glitter!
The Dixie Chicks have won five Grammy's including record and song of the year for "Not Ready to Make Nice." They also won best country album and country performance by a duo or group With vocal, even though they no longer consider themselves country artists and were shunned by the country music community.
And to make it even nicer, they took the big daddy home: Album of the Year for "Taking the Long Way."
Stick it to 'em, girls!
Photo credit: Lucy Nicholson/Reuters
Posted by Unknown at 9:09 PM 3 comments:

I just finished reading the copyeditted version of Switchcraft and the story wasn't as bad as I thought it would be.

When I started this book way back when I was six months pregnant, the wiring in my brain got all twisted around because I've been living with this bone-chilling fear that the story is the worst I've ever written. My agent loved it. My editors loved it and so you would think that I'd believe them.

But until I read the manuscript again, I realized that it's pretty good. There are some areas that need a bit of work. Overall, I think Switchcraft is touching, sexy, funny and honest and I can't wait for you to read it.

(By the way, it took me five minutes to write the previous sentence because I have a weird thing about praising myself.)

Quick reminder: the sneak peek to "Till Death Do Us Part" (from the anthology, Names I Call My Sister) will only be up for two more weeks! So if you haven't checked it out, or you haven't entered the contest, you better get over there!

Will it ever f%#$ing happen?

So does that mean we're stuck with super hero offal like Ghost Rider where Nicholas Cage is doing the sad comb-over thing?

Wait a second ... wouldn't Eva Mendes make an awesome Wonder Woman? She would, if only H-wood could get its act together, stop making ridiculous movies like Norbit and MAKE THE F%#$ING WONDER WOMAN MOVIE!
Posted by Unknown at 12:43 PM 3 comments:

has to read the final Harry Potter book for me. I can't do it. What if she kills him off? Or Ron, or Hermione or Hedwig?!?

So please, one of you has to read it first and then tell me if it's okay.

Even though the Harry Potter series has sold millions of copies around the world and made JK Rowling one of the wealthiest women in entertainment, I wouldn't want to be her right now.

First, I don't know how she wrote all those books with the world bouncing over her shoulder.

Second, how would you say good bye to a character who has lived with you for more than a decade? I miss Tamara, Will, Mrs. Allende, Isa ... all of them so much.

Okay, back to work with me. Aracely is about to fitted for her traje (Mariachi suit) and I can't wait!