Between the Pages With Mindy Klasky 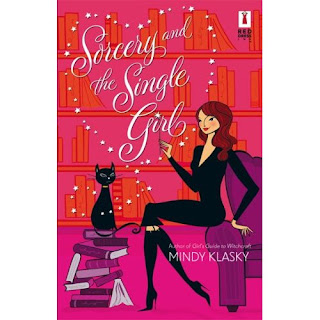 Last year at around this time, Selina McLemore gave me a copy of Girl's Guide to Witchcraft by Mindy Klasky. I started reading the book while waiting to board my flight home and finished it just before we flew over the Grand Canyon. I've been dying for the sequel, Sorcery and the Single Girl ever since! But as of yesterday, Switchcraft and Sorcery are bookshelf neighbors and to celebrate, Mindy tells us all about her series!

Chica Lit: Wow, book eight ... does writing get easier or harder with each new story?

Mindy: It gets easier *and* harder... It's easier, because I know that I can play this game - I've figured out the time management aspects, and I know that no matter how much I hate, hate, hate the middle chapters, I'll get through them, and it will all work out in the end. It gets harder, too, though. With each book, I meet more great people and I want to spend more time at conventions, and online chatting with people, and building my presence as a writer. (And when I win the lottery, I just might follow through on those desires! :-) )

Chica Lit: This is the second book in the series. Did you know what was going to happen to Jane over the course of three books when you sold the idea to Red Dress Ink, or did she refuse to go away after book one?

Mindy: I sold the first book, Girl's Guide to Witchcraft, on a three-paragraph blurb (not even a synopsis - it didn't include the ending!) We negotiated a contract that called for a total of three books. As I wrote Girl's Guide, I discovered the strands that could be pulled into Sorcery. By the time I had completed my outline for Sorcery, I knew the full, complete story arc, which will conclude in 2008 with Magic and the Modern Girl.

Chica Lit: What aspects of your heroine frustrate you the most and what makes you like her?

Mindy: I love the fact that Jane Madison refuses to stay down, even when the world around her is falling apart. She may have her bad days -- days that can only be redeemed by fresh-baked chocolate chip cookies and/or mojitos -- but she never believes that the bad times are going to last forever. That said, Jane can be a bit too wrapped up in some details of life -- most notably, fashion. (I'm nowhere near the makeup fiend that Jane becomes under the expert tutelage of her familiar!)

Mindy: I've finished drafting Magic and the Modern Girl - it will go into production over the next year and appear in bookstores in October 2008. My next writing venture starts a new series - The Sisterhood of the Flame. In the first volume, a stage manager discovers a magic lantern when she's cleaning out the prop closet. Nothing in her theatrical background prepares her for the show that her genie is about to stage!

Chica Lit: How did you get involved with First Book and would you tell us more about it?

Mindy: I discovered First Book when I started looking for a good cause -- a charitable organization to which I could donate 10% of my profits from the Witchcraft books. First Book - http://www.firstbook.org/ - is a non-profit that gives underprivileged children their own books to own forever. I remember the joy I took in reading, from a very young age, and I'm thrilled to find an organization that is so well-run and so dedicated to helping children throughout the country.

Visit Mindy's website or just go for it and get her books today!

Sorry Mary, my comment doesn't have anything to do with the interview with Mindy [though I enjoyed it]. Did you hear that Jessica Biel will be playing Wonder Woman? Gag. I think she's a decent actress but I'm not a fan. She's all wrong for WW! All wrong I tell you!!! Amazon, my ass.

Hey Sonia: Ah dude. I don't know what to say other than I should just write a Wonder Woman story myself and have her live on in my imagination.