Between The Pages With Lisa Wixon 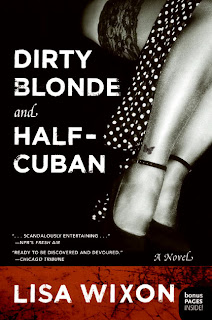 She only planned to stay a week in Cuba, but came home a year later.

Lisa Wixon had saved enough money to travel the world but when she arrived in Cuba, via Panama City, she befriended a young woman who revealed that she was a jinetera (literal translation: a jockey), a young professional woman who earns money by acquiring foreign boyfriends, much like a 17th century courtesan or royal mistress. Lisa turned her experience among jineteros into a novel, Dirty Blonde and Half Cuban.

I've owned this book for about a year and when I finally set a time to interview Lisa, I sat down to read it. Four hours later when I finished the book, I had to go back and start it all over again because I didn't want to leave those characters behind. Also, Lisa told me that there wouldn't be a sequel.

Chica Lit: How long did it take you to write this novel and what was your process?

Lisa: The first 50 pages took two to three months. I wrote the last 200 to 250 pages in ten weeks and did nothing nothing else. I wrote from 10P till 930A. It was the only way to create the world.

Chica Lit: Pardon me for asking, but how do you support yourself with a writing schedule like that?

Lisa: Travel writing is my main occupation. I take in PR jobs, just to make enough money to take off and think and write. It's hard. Isolating myself is not something that I love because I'm an outgoing person. With this novel and the one I'm writing now, I have to really isolate myself. Torture is the only way I get it done.

Chica Lit: How did you research your book?

Lisa: The story of Alysia going to Cuba is fiction entirely. I held myself to nonfiction standard talking about issues and facts such as how much women make compared to how much a pair of tennis shoes cost.

Chica Lit: Why did you use an American character like Alysia in telling this story?

Lisa: I knew that people in America would understand her. There are so many similarities between Americans and Cubans in that they are very hard working and they place a high value on education. I wanted to use Alysia as an American woman with education and an upper class background who is forced to live the life as a jinetera to survive in Cuba.

Chica Lit: One of the things I loved in the story were the sex scenes because during those moments, Alysia seems to suddenly wake up and realize what she's gotten herself into. It's like she realizes she fell down a rabbit hole.

Lisa: The Cuban women who are jineteras feel that, too. They ask, why have I done this? I'm a doctor, why do I have to do this?

Chica Lit: How did your family react to the novel? Did they wonder what you had been doing in Cuba all that time?

Lisa: Because this story is so far out from my real life experience, they didn’t think anything is true. My mom tells people, "Read my daughter's book but wear sunglasses!"

Chica Lit: What was your life in Cuba like?

Lisa: After I befriended her (the young jinetera), I moved in with her family. I met other jinoteros and I'd go out at night with them and watched them get picked up. I spent time with them and their boyfriends and girlfriends from other countries.
Chica Lit: How did you feel watching people you came to love, sell their bodies?

Lisa: It was really difficult, a very emotional time for me. I often had to question why I was there putting myself in an emotionally difficult situation and tried to compartmentalize it there. I had to tell myself that me being there would not change the consequences; this would happen if I was there or not. When I came back, it took me a long time to process it. Anger and a sense of indignation fueled me to write this book.

Chica Lit: How difficult was it to get into the heads of your characters?

Lisa: It is almost impossible not to feel what the characters feel. The intensity with which I lived in Alysia's skin while writing the story was one of reasons why I procrastinated after the book deal. I had to cut out the rest of the world to go back into Cuba at my desk.

Check out Lisa's novel, Dirty Blonde and Half Cuban.

Labels: Between The Pages, Dirty Blonde and Half Cuban, jineteros, Lisa Wixon