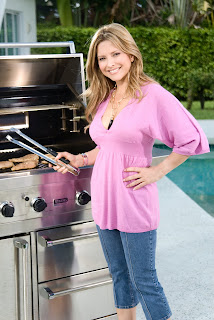 For Ingrid Hoffman, the smell and taste of oatmeal and homemade orange jam brings to life the memories she spent at the table with her abuelos. Her Food Network show, Simply Delicioso, is driven by her passion for making new memories with family, friends and food.

"We live so busy in this country that we forget the importance sitting around the table," she said. "I make my food easy so you don't have excuses not to make it."

Using fruits, vegetables, spices and herbs, Hoffman follows her instincts in creating easy, flavorful dishes with a distinct Latin flavor. She has fans and critics for her reinterpretations of traditional Latin dishes, which she proudly calls Spanglish cuisine.

"This is a cuisine that for many, many years has not been altered and is deeply rooted in its tradition," she said. "[Chefs] are finding ways of bringing it into this millennium with new techniques, new flavors and giving new life to ancient ingredients."

Born and raised in Colombia, Ingrid learned how to marry her love of food with business, literally at her mother's knee. A Cordon Bleu trained chef, her mother started a catering company out of her home kitchen, eventually growing the business to handle events for up to 1,000 guests. As soon as she could, Ingrid remembers begging her mom to work. But then at 13 she was sent to boarding school in Miami, falling in love with the city and determined to return. She did and opened a luxury boutique and restaurant, Rocca that was featured on Lifestyles of the Rich and Famous.

"I loved the creative part of it," she said, of her entrepreneurial enterprises. "But the running of a business and restaurant was difficult. Maybe it would've helped if I was a big guy with a mean face."

An admitted adventurer with the heart of a teenager but the head of a woman, it took Ingrid awhile to find her way. But the door to her new life opened when a friend invited her to appear on a small, local TV show to demonstrate recipes from her restaurant. Before she knew it, Ingrid was doing segments for Despierta America. In September 2005, her Spanish show, Delicioso premiered on DirecTV and a year later, premiered on Galavisión.

With a new season on order from Food Network, her continuing production at Galavisión and the upcoming release of her debut cookbook, Simply Delicioso: A Collection of Everyday Recipes with a Latin Twist, Ingrid stays grounded by working closely with her mother (who brainstorms, researches and tests recipes) and by staying true to her concept of delicioso.

"I cook for the love of bringing family and friends together, and for eating and drinking. I didn't do it to be a Suzy Homemaker, which believe me, I'm not!"

Ingrid invites you to try her Limon, Limon menu this weekend! See the recipes below and tune into her show, Simply Delicioso on Saturdays at 11:30 a.m. E/P on the Food Network.

Well, I know what I'm making for dinner tonight! Thanks for the great interview. My daughter is addicted to the Food Network. I'll have to watch, too!