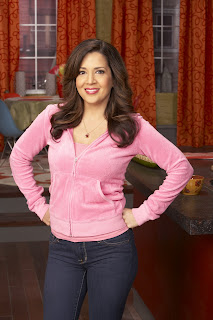 Actress Maria Canals likes to think that her role on Wizards of Waverly Place is preparing her to parent adolescents. Her alter ego, Theresa Russo, is the mother of three wizards-in-training. The three teens are trained by their father until one is chosen to be the next wizard of the family. Although Theresa is not magically inclined, she helps them navigate the "normal" challenges of teen life.

"This show is a complete blessing to me on so many levels," Canals said. "It's a funny comedy and as an actor you get all kinds of material that's not very funny. It's a kids show at a time when I have kids."

When she first watched the show with her two daughters, ages four and two, she feared her oldest might get jealous of her on-screen "kids."

"I told her that I'm the pretend mommy and that's my pretend kid," she explained. "I totally underestimated power of pretend, which is what kids do all the time. When she visited set she'd say, 'that's the pretend big kid!'"

Canals began her career when she won a scholarship to the University of Miami. As she went from high school plays to paying roles, she realized acting was something to she could do for a living.

In 1993, she booked a role on the TV series, Key West and moved to Los Angeles. Unlike Hilary Swank, Canals never had to live out of her car.

"I got a great agent and when I moved to L.A., I was prepared and trained," she said. "This business is unpredictable. I was very, very blessed to have worked steadily and there have been wonderful projects – some came and went. You have to love the work."

Married to actor, David Barerra, Canals admits that its tough continuing her twenty year career in acting while raising a family. Recently, she brought her girls and her nanny with her to Toronto where she filmed Camp Rock, a teen musical that will be released in summer 2008.

"My husband and I have the same priorities: we love our work and committed to it but it's not our identity," she said. "I don't want to be one of those people who missed out on this."

Watch Maria in action on Wizards of Waverly Place Friday nights at 8:30/7:30 Central on the Disney channel.
Posted by Unknown at 7:22 AM