Between the Pages With Michelle Herrera Mulligan 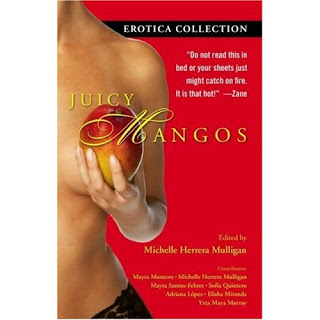 When I was in college, a friend of mine told me that her mother would say to her and her sisters that when it came to sex, they had to sit like they were holding a dime between their knees. My mom never put it that way, but it was understood that I would die if I came home and told her that I was pregnant before I got married.

Even though us Latinas are portrayed as spicy sex-kittens who render men powerless, most of us walk around with the specters of our disapproving parents looming over our shoulders. When I saw the cover for Juicy Mangos, my first thought was: what would the authors' mothers think?

So I had to ask the editor and one of the contributors, Michelle Herrera Mulligan about her experience.

Chica Lit: You write in the Editor's Letter that Johanna Castillo approached you with the idea. How do you know each other?

Michelle: Johanna contacted me because she liked the work I'd done on Border-Line Personalities, a new generation of Latinas dish on sex, sass and cultural shifting. The anthology had a raw, honest sexuality, and I think she liked it and wanted to tap me to edit Juicy (not to mention the fact that she heard I was a slavedriver editor!).

Chica Lit: How did the story of "Juan and Adela" come to you?

Michelle: Juan and Adela came to me as I started reflecting on characters I hadn't seen before. I started to visualize this woman who fascinated me, a complex, sexy older woman who hadn't had the opportunity to realize her dreams, someone like my mother. I wondered what would happen if her world got shaken up by a younger man. I experimented with a lot of voices for the narrator that would tell her story and once I had that down the rest just flowed.

Chica Lit: Did you have any fears about writing erotica? How did you overcome those fears?

Michelle: my fears about writing erotica were that one: my work wouldn't be taken seriously and two: people would judge or speculate about my sex life personally. I definitely had the subconscious Catholic bad girl fear thing...I was so worried about what my family or my boyfriends family would think if they found out. Ultimately it was doing good work that got me over those fears. When you write good sex scenes, it is hard work and it was a great challenge to my writing.

Chica Lit: How did you find the contributors?

Michelle: We found the contributors by seeking out diverse authors we admired. We didn't look for "erotica writers"; we wanted incredible authors who made sex and sensuality pivotal parts of larger works. We wanted the sex to reveal something deeper about their characters. Once we had a small list of people we wanted to target, it was surprisingly easy to get people to agree--the writers were really excited to write about sex in an unexpected way.

Chica Lit: What were the challenges you faced while editing the stories?

WOW! That's a totally eye-catching cover. The colors, the woman, all of it. Very sexy.
E

Hey Erica: You should see what's inside!