Between the Pages with Misa Ramirez

The next time you look up the word persistence, Misa Ramirez's name should be listed in the definition. If you're complaining about having to do a third draft, pay attention to what happens when you're willing to do six years worth of rewriting.

Chica Lit: What inspired the idea for Living La Vida Lola and how long did it go from manuscript to published novel?

Misa: It has taken six years, three agents, and about 1,000 revisions to bring the book to publication, but it made it, and Lola’s here to stay!

I started writing it right after I had my fifth (and last) baby. We had just moved to the Sacramento area, I wasn’t teaching at the time, my husband was in a wheelchair from an Achilles Tendon injury, and I HAD to get out of the house! I started going to a local coffee shop with a friend and we’d do little writing prompts. During one of them, Lola came to me as a character. The more prompts we did, the more Lola and her family and background developed.

She came to me as a Latina, I think, because I wanted to write about someone like my own children. Someone who straddled the lines of being American, but who embodied and embraced her family’s culture at the same time. I want her to find her balance, her identity, and her true self over the course of the series. No small order for anyone!

And then there’s the romance element. Love makes it all worthwhile and I wanted Lola to find love. Or at least the hope of love. =)

Chica Lit: Did Lola pop out of your head complete, or did it take time for her to develop into a full-fledged character?

Misa: I knew immediately that Lola would be a PI since I wanted the book to be a mystery. And I knew that I wanted her family to be a big and important part of her life. I wanted to delve into the interpersonal relationships that might exist in a traditional Mexican family (like my husband’s) if one of the daughters wanted to be a private investigator and buck the expectations her parents had for her.

It took a long time for Lola to fully develop, but now that she has, I love her! She’s got her principles and morals and her goals. She’s a black belt in kung fun, loves yoga, and won’t let anything get in her way. But she’s got weaknesses, too. She’s soft and feminine, but tough. She describes herself as Xena, Warrior Princess, with an occasional Cinderella moment thrown in.

Chica Lit: How much research went into your book?

Misa: About 18 years worth!!!! All the time I’ve been married to my husband--observing, being part of, loving, and absorbing his culture. My biggest goal in writing Lola was to make her an authentic person. I never want to misrepresent myself as a Latina, and I always want to be true to the beauty of the culture and all that means based on my experiences as the wife of a Mexican American man. So, lots of research, but just from living!

The mystery details of the book did require researching the process of becoming a PI, what the rules are, details about tattoos, particularly self-done tattoos, visiting the state Capitol and getting a private tour by my brother-in-law who works under the Treasurer. Things like that. All of it has been pretty fun.

Misa: I love being a writer, especially now that I’m not teaching anymore. I have dedicated time to write and it doesn’t encroach on time with my kids. At least not as much! I love that my kids, husband, and parents are so proud of me. I love that I’ve modeled the hard work and determination to pursue a dream, and I’ve reached my goal. I think that’s invaluable.

Things I don’t like about being a writer? Hmm. Probably the nervousness that I’m feeling over doing book signings! Writing is so solitary, and you live in your imagination so much, that to go out and speak about your books is daunting!

Chica Lit: When do we get the next Lola adventure?

Misa: The next book, tentatively titled Dead Girl Walking will be out a year from now. After that will be Bare Naked Ladies, the third book in the series. In it, Lola’s case takes her to a nudist resort. Yikes! I’ll tell you about the research for that one another time!


Get your copy of Misa Ramirez's book at your favorite independent, or at my store! 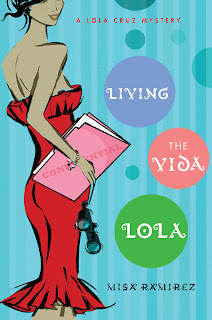 Thanks for having me today, Mary!