Between the Pages With Frederick Smith 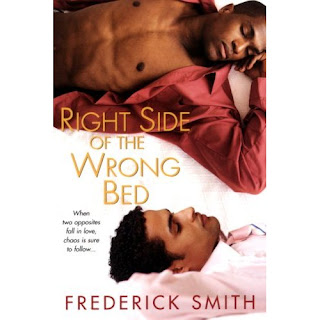 I remember the first time I saw Frederick Smith. We were in Miami for the Chica Lit Fiesta sponsored by Alisa Valdes Rodriguez and Fred walked into the room with Patrick Sanchez and Erasmo Guerra. In a conference of women, they were the three lone rangers but having read their books, they are some of the most talented writers I've ever met.

Two weeks ago, when Fred sent me a copy of his book, The Right Side of the Wrong Bed, I made a terrible mistake. It was the last stretch of NaNoMo and I cracked open the first page and in that moment, I was hooked by the story of Kenny Kane, a successful thirty-something who has been betrayed by the love of his life and has to start all over again. He meets Jeremy, a gorgeous, charismatic twenty-one year old who attracts him like a bee to honey. And that honey traps Kenny into a relationship that threatens his professional life as well as his heart.

By the way, it wasn't a terrible mistake (it just sounded more dramatic) and I finished NaNoMo at 30,000 words!

Anyway, Fred took the time to talk with me about his new book.

Chica Lit: What inspired the story of Kenny and Jeremy?

Fred: I started writing this novel on the day I got dumped by someone I was dating. He said he was no longer interested in me and had started dating someone I thought was a friend of his, but was actually more than just a friend. My intuition had told me one thing about their "friendship" while we were dating, I'd chosen to not to follow it, and I wondered how I'd been so stupid. Instead of continuing to put myself down, I decided to channel that energy into writing. And while this story isn't a play-by-play of our relationship, the real life breakup inspired the creation of Kenny, Jeremy, and all the fun and not-so-fun situations the characters face in the novel.

Chica Lit: The thing I took away from The Right Side of the Wrong Bed was the issue of integrity. Kenny has been a victim of a dishonest partner and he has so many reasons not to trust Jeremy.

Fred: Integrity and intuition are two areas I think are important to relationships. Sometimes, though, we're blind to or choose to ignore signs that tell us that the person we're with may not be the right one for us. We do it for a number of reasons. For the character Kenny, he doesn't want to appear to have failed at yet another relationship. He also fears to some extent that at age 33 he might not have another shot at meeting someone as young, exciting and attractive as Jeremy, even though in his heart he knows they shouldn't be together... and even though deep inside he knows he can find someone else who's more compatible. Those same factors might influence us in real life to ignore issues of integrity because we're acting out of fear rather than out of genuine love of self.

Chica Lit: Looking back on your two books, what is a common theme and why?

Fred: I tend to write characters who are culturally-empowered, meaning they're not ashamed of their ethnic or class backgrounds, and aren't looking for validation from majority culture per se. This is important to me, because sometimes young people of color who decide to come out but don't get affirmed immediately by their families/communities, may search for acceptance from people and communities that don't necessarily have their interests at heart. They feel they have to choose sexual orientation over ethnicity. But these characters navigate all their labels and communities well and have a strong sense of identity.

Chica Lit: What was your process in writing this book? How long did it take to complete?

Fred: This book came so quickly to me. Partly because I had so much energy from the break up, and also because I absolutely loved all the characters created in the book. They were fun to write, so full of life, and really leaped off the page for me in the creative process. I generally get up around 4:30 or 5 in the morning and write for a couple hours before going to my day job. I finished the first draft of RIGHT SIDE in about three and a half months, and my agent and editor thought it was in pretty good shape, though I did do some extensive revision work. I wish I could go through a break up every year and maybe it would help my writing productivity, lol.

Chica Lit: Which authors and books have inspired you?

Fred: I was inspired when Terry McMillan and E. Lynn Harris came along on the fiction scene. When I discovered their work, while in my late high school and early college years, in the early 1990s, I knew that one day I could write a novel that might one day be published. They opened so many doors in publishing, and I always have credited them for giving me hope that I could realize my dreams in fiction writing. Other authors I admire for their works or their career paths are J. California Cooper, Eric Jerome Dickey, Alisa Valdes Rodriguez, Lorrie Moore, and Tayari Jones.

Chica Lit: What are you reading now? What was the best book you read in 2007?

Fred: Right now I'm reading two books: Them by Nathan McCall and Boston Boys Club by Johnny Diaz. The best books I read in 2007 weren't written in 2007: Notes on a Scandal by Zoe Heller and Chasing Destiny by Eric Jerome Dickey.

Get to know Fred or order your copy of Frederick Smith's The Right Side of the Wrong Bed at:

Labels: Frederick Smith, The Right Side of the Wrong Bed

Hi Mary,
I just finished Fred's book also and I was blown away. Not only is he a super cool person he is such a good writer. I actually read his book and yours this weekend. I loved your book. I read it in one day. I am frantically revising my dancing book and also working on my Marine Corps wives book.

I'm so glad that you liked my book! If you were reading me and Fred than I'm extra flattered.

Let me know about your dancing book. I remember when you read at the Chica Lit Fiesta!