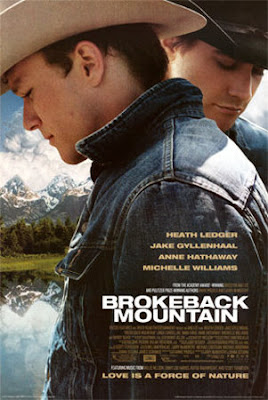 Didja hear about the shocking new video of Heath Ledger that will air on Entertainment Tonight? I won't watch it because I'll be at a book club meeting with my neighbors. But I when I read the story I wondered if we would remember Mr. Ledger more for his alleged drug addictions than his electrifying performances. When we think of great actors, some of us picture Brando screaming "Stella!", or Clark Gable standing on his side of the "walls of Jericho" while Claudette Colbert dresses in his pajamas. (If you haven't seen It Happened One Night, GO!) Ever since Robert de Niro in Godfather II, I haven't seen an actor use silence more effectively than Mr. Ledger did in Brokeback Mountain. And that was just the beginning of his journey that was cut too short. But when I hear his name, I want to remember him as the youngman with a gravelly voice and a face that could say more than words.
I used to think that artists were selfish people, particularly us writers. We shamelessly steal the quirks and witticisms of strangers we sit next to in restaurants and airports. We mine our family histories or the crime section of the newspaper for book ideas. We hide away from family and friends to write down our make believe and then take off for writers conferences and such to promote our books. Ultimately, we ask other people to fork over their cash for a story.
But thinking about Mr. Ledger and his legacy, I think that actors, writers and artists are the most giving. We rip open our hurts to heal. We uncover truth, we tantalize with our fantasies and we flash our hearts and ideals for all the world to accept or ridicule because we believe in love or justice or the ways of the Force. We are always vulnerable because we like my mentor, Ben Masselink once told me, "The writer's skin must be tough to take the criticism all around him and yet, it has to be sensitive to the world around him."
And yes, we still ask for your money. Although with the amount I've made in the last two years from my books, I would've been much better off working as an accountant.
Last week's BIAW pushed me to write. But today I'm thinking of the legacy my books will leave when I'm gone. I hope my son will crack a smile when he reads the parts where Audrey, the baby, appears in Switchcraft because his antics are right there on the page. I hope my niece and my daughter (if I have one) will know how much I loved my mother when they read Hot Tamara. I hope that whoever reads "My Favorite Mistake" in Friday Night Chicas will think twice about the price of ambition.
What do you hope your legacy will be?
Posted by Unknown at 2:31 PM

Mary, I love this post! I totally get what you are saying here, how writers, artists, etc. are both selfish and selfless. In the end, I want to weigh in more on the selfless side.

After Brokeback, I shamelessly wept. Then cried the NEXT day just THINKING about his performance. Agonizing. So yes, yes, yes.

As for my legacy . . . I don't think about it. I would like to think just that I was a good mother to my children.

I hope I make someone laugh (hopefully with me, not at me lol)

And I hope I reignite someone's passion.

Excellent post, Mar. I just watched Brokeback Mountain again, and Heath Ledger's performance is indeed perfect. And, yes, for everyone in that cast to give the amazing performances that they did, they had to not just be skilled, they had to be brave. And before watching the film, I reread the short story by Annie Proulx, and the same goes for her. An artist is just not able to produce something that resonates with the audience if she herself is unwilling to "go there."