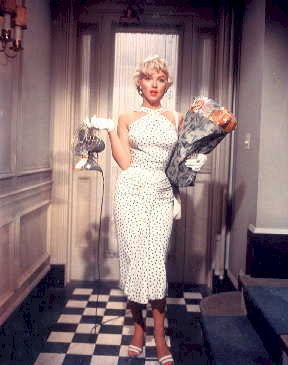 The hardest part of a story to write is the first line. Speaking from my experience as a reader (e.g. what pulls me into a story) and a writer (what has sold my work), a character has to make an entrance. Or, if told in the first person, a statement. I don't mean just having someone walk through a door, or wake up in bed and most definitely not stare at herself in the mirror over the bathroom sink. Characters arrive. They have a presence that makes you turn to the next page and the next until the end when you (hopefully) wish the book hadn't ended so soon.

When I think of great entrances off the top of my head, I recall Barbara Stanwyck's ankles as she descends down the staircase in Double Indemnity, or Nitta Sayuri asking the reader to imagine sitting with her at tea in Memoirs of a Geisha. Actually the most tangible entrance I've ever witnessed was in the Seven Year Itch when Marilyn Monroe's fan cord stuck in the doorway. Me and three hundred gay men gasped in the dark and held our breath at the palpable energy that radiated from her 50 years after she'd shot that scene.

Right now, or rather right before I began this blog, I arrived at the phase of my WIP when its time to write the first line. Some lines appear just like that. Some take a few drafts or they hide from me until I realize that the first 20 pages I wrote don't belong in the book. The only way I know that I have the first line is when (a) it no longer bugs me in the middle of the night, and (b) when it makes me sit up and shout, "Whoa!"

So here I go into territory unknown and still no first line in sight. But I figure it'll show up sooner or later.
Posted by Unknown at 12:00 AM

Hi, Mary. Thank you, a million times over, for this post! Sometimes I fear that my struggles with topics such as this are because I'm just starting out. It's wonderful to hear that established authors- as yourself- still worry about opening lines. I love your confidence that it'll come to you eventually and I really love the movies you mentioned! Great taste!
Wonderful post!
Good luck to you and with your work!
~Anna Rodriguez www.thesolwithinanna.blogspot.com

Thanks Anna! I once saw Nora Roberts give a talk at RWA's National Conference. Someone asked if writing boks are now easy for her and she replied, "It's like starting over each time." And girlfriend has written over 200 books!

So we all have our insecurities but we just smile at them and keep on rolling. Or, you become Danielle Steele and hire people to write for you.