Between the Pages With Margo Candela 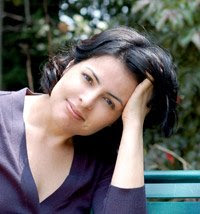 Margo Candela was standing on a street corner in downtown Phoenix when I picked her up. We had lunch. We had a few laughs. We then did our thing at the Celebrating Chica Lit panel at the National Hispanic Women's Conference. I distinctly remember when someone asked us how we balanced writing with our family lives. Margo is not one to mince words. She took that mic and said, "You make the time. If it's really that important, you just do it."

With her third book, More Than This now in stores (it is a Target Breakout book!) and a fourth on the way, Margo has the goods to back up her convictions.

Chica Lit: What was the biggest challenge in writing More Than This?

Margo: In More Than This I got explore the ‘what if’ period before anything actually happens. I also wrote it from two separate and alternating male and female perspectives. Usually I write about what happens after the relationship implodes from a single perspective. I was forced to step out of my comfort bubble, plus it’s a love story. But I figured if I was going to do it, I was going to go all out.
Chica Lit: Do you feel that you accomplished what you set out to write?

Margo: My intention was always to write a love story between two people who don’t meet. Some people want a nice tidy ending but for me it was more interesting to see Evelyn and Alexander, the main characters, as individuals, not as a couple. I wrote the book I said I was going to write and it was published. I think that’s pretty wonderful.

Chica Lit: When do you know you're done with the book? Do you miss your characters?

Margo: When I start a book I always know what’s going to happen at the beginning, in middle and at end. The work comes with filling in the gaps in-between. Sometimes situations or locations change, characters evolve but my basic points usually remain the same. I really haven’t had a chance to miss any of my characters. I’ve gone from book to book, by the time one is out, I’m in the middle of the next one. My hope is to take a bit of a break this fall and enjoy what I’ve accomplished. Maybe I’ll even read my own books, because I haven’t since I turned in the final profs. Is that bad?

Chica Lit: Does writing get any easier with each book?

Margo: Yes and no. I just turned in my fourth and I became an spaced-out incoherent zombie for a while. I work well with outlines, they keep me on track, and I find them reassuring since they tell me where I should be and where I’ll be going. For the book I just finished (How Can I Tell You?, Touchstone, Summer ’09), I didn’t have one and it made life not so fun for a few months. I’ll be outlining the hell out of my next project. Lesson learned.

Chica Lit: More Than This has been out for almost a month. What has surprised you about the readers' reactions?

Margo: Readers have been very supportive. It made me realize I should have written a love type story a lot sooner. When my editor, Sulay Hernandez at Touchstone, told me Target had picked it up as a Breakout Book because the buyer loved the story, I knew I’d done something right.

Chica Lit: Do you enjoy being a writer?

Margo: Some days I do, some days I do a lot of laundry and sighing. That being said, this is by far the best job I’ve ever had. I’d like to branch out in my writing but this is what I’d like to do for the rest of my life.

Chica Lit: When did you know you were a writer?

Margo: I was applying for my first passport years ago and when I came to the line that asked for my occupation, I put down writer. Just like that. No second guessing myself or trying to justify it. It was a great feeling once I realized what I’d made that mental leap.

Chica Lit: I heard that you just turned in your fourth book. What is it about or what
can you tell us at this point in the process?

Margo: After More Than This, I wanted to focus on a single first person perspective again. How Can I Tell You? tells the story of how Raquel Ortiz makes a royal mess out of her life and then tries to pretend nothing has changed. She goes as far as to fake going to work so her family doesn’t find out she’s been forced to leave her dream job. A line from cover copy of my next book reads that I’m “a writer who thrives on creating morally ambiguous situations in her novels” and I’d have to say that’s pretty accurate. She’s not going to do the right thing and things may not work out for her, but it’ll be a fun ride.

Margo and I will be appearing together along with our fellow authors Jamie Martinez Wood and Sandra Lopez next month. Check out the details at my Events page and get your signed copy of More Than This.